It’s August.  I don’t need to know it’s high-travel season; I read your blog entries written from around the world every day.  If you’re not on a trip right now, then you just got back from somewhere, or you’re ready to go abroad, or you’re thinking  about it.  This is the time of year when many of us most want and need a vacation.  Summer is running out; students go back to school soon; the dreary months of the year seem depressingly near.  Many of us wait until August to take our summer vacation because we had too much to do at home in June and July.  We’re relieved to finally, finally be on our way.  Then the State Department issues a travel alert… for the entire month of August.  Do they call it a terror alert?  No, they call it a travel alert.  That makes us feel so much better, right?  And yet do we sit on our passports and let the doubt and fear creep into our minds?  From what I can tell, the answer is definitely no.

The anticipated targets are just vague enough, and just specific enough, to be infuriating.  The embassies are closed across the Middle East and North Africa.  But I’m not in the Middle East, you answer.  Should I stay the heck away from the embassies in all the most popular European capitals because they might be threatened too?  Well, we don’t know.  It would be a “good idea.” It might be a good idea, too, if you weren’t on top of the Eiffel Tower at 3 pm on a beautiful afternoon.  Or aboard The Eye in London the next evening.  Or somewhere else insanely popular at an insanely popular time.  The point is, there are lots of ways to minimize that thing we call personal risk.  Personal risk is about reducing the chance that you’ll be in the wrong place at the wrong time.  And what does it really add up to?  Does something either happen or not, and we’re along for the ride either way?

The questions really is, does a travel alert actually change our behavior?  I’ve talked to tourists who won’t take a direct flight across the United States because they believe there will be a repeat of the 9/11 attacks.  They will lay over in Toronto on a flight from Los Angeles to Washington, D.C., and then tell me how much safer they feel when they land.  I’ve talked to other people who won’t stay in any kind of large chain hotel overseas because they think that an independent or locally-owned hotel won’t be targeted.  I’ve been on board a flight from Paris to London that was running three hours late, and the people next to me didn’t complain once because they would rather sit on the tarmac all night rather than deal with the stress of riding through the oft-threatened Chunnel.

Personally, the travel alert isn’t going to change my plans to fly into Istanbul next month.  The fact that Turkey isn’t on the Middle East and North African “danger list” hasn’t inspired me to keep my plans.  I just don’t think anything’s going to happen to me.  I trust my instincts, my common sense.  I trust in my vigilance to notice my surroundings, to know when something’s “wrong,” and to be a small part of preventing a tragedy.  Is this arrogant?  Yes, I think so.  It distracts me from the idea that I believe in my own luck to save me from a serious incident abroad.  Am I alone in believing this?  No, I don’t think so.

Most of us will use the travel alert to reduce our personal risk.  We might choose to travel “smaller,” travel more quietly.  We’ll travel “smarter,” whatever that means, and keep an eye out.  The more cautious among us will stay the hell out of and off “popular” destinations and routes, and go to bed thinking about how there’s no strategy for luck.  The more brazen among us will feel more relaxed and invigorated after 2,000 miles on a Eurail pass without seeing a single nervous-looking security guard.  That’s 2,000 more miles without incident… ha!  And we’ll keep going, and going, and going.

If nothing happens this month, then we’ll all feel lucky, and we’ll love traveling (and in one sentimental figurative embrace, the world) even more than we do now.  If something does happen, then we’ll rage over it, we’ll adjust, we’ll wait, and head right back out.  With a more watchful eye this time. 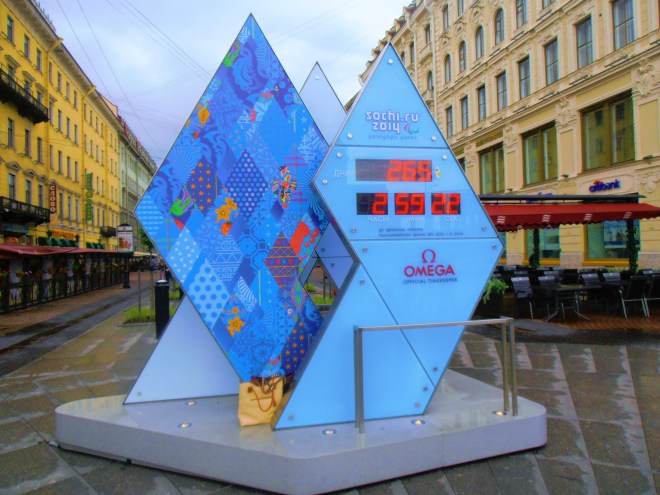 When I was in Russia in late June, I didn’t say anything to anyone about the two unattended bags below the Olympic countdown clock.  Now, I would.  Would it make me feel any safer?

© Rita Anya Nara, 2013-2014. Unauthorized use and/or duplication of this material, text, or images, without express and written permission from this blog’s author is strictly prohibited. Small excerpts and links may be used, provided that full and clear credit is given to Rita Anya Nara with appropriate and specific direction to the original content.
Loading Comments...
%d bloggers like this: