Do you often come back from a trip and feel like you need a “vacation to recover from your vacation?”  You’re not alone.

Many people feel this way because they didn’t let themselves decompress at any time while they were away.  Given the greater emotional and physical energy exerted during a trip, it’s easy to feel drained or overstimulated during and after travel.   Finding a tranquil place to relax and regroup during your trip is one of the most obvious ways to prevent mental or emotional burnout — and keep every day of your vacation feeling (almost) like the first day you arrived.

Unfortunately, traditional “quiet” places may turn into anything but if everyone else decides to go there for their own relaxation.  Think of oceanside cafés that get so loud you can’t hear the waves washing up; well-known churches that sound like malls inside; and parks that put you in the path of an impromptu tag game – hardly anyone’s idea of peace.  Don’t think you have to return to your hotel room mid-day, or wander into an isolated (and potentially dangerous) area in order to “get away from it all.”  Here are a few universal, but often overlooked, places to unwind.

Botanical gardens.  These can sound like a bore to those not interested in plants, but botanical gardens have all of the relaxing characteristics of parks, but because of the (usually) small entrance fee, attract a different crowd; your chances of encountering skateboarding teenagers, drunks, or soccer practice are slim to none.   There is usually no shortage of places to sit down, and you can generally stay as long as you want after paying the day’s admission.

Universities.  Many universities have the look and feel of self-sustaining villages, and you’d have a hard time finding one without some green areas and benches (and often a pond and some wildlife).  Frat and sorority houses are less common outside North America, and while there’s obviously going to be plenty of activity on the main thoroughfares on weekdays, the overall atmosphere – especially on weekends – is subdued.  Another plus is that many universities are easily accessed within metropolitan areas, and even the grounds of most private universities are open to anyone.

Zoos.  You’d be hard pressed to find a zoo without an attractive, natural setting – and interacting with (or just watching) animals can quickly pull you out of your head and back into the moment.  About half of all major world cities have a zoo within three miles of tourist areas.  Try visiting on a weekday evening, or mid-afternoon after school groups have cleared out.

Embassy areas. These neighborhoods are particularly prominent in capital cities, and are often in easily accessible areas.  Although there aren’t many places to sit down, they are certainly a great place for a quiet stroll.  Embassy neighborhoods are rarely crowded, aesthetically pleasing, and you can let your guard down because security is second to none.

Stationed trains.  Particularly in European cities, long-distance trains pull into a station well before departure – by an hour, and sometimes more (especially if your city is the route terminus).  A parked train can be a very peaceful alternative to trying to rest your mind and feet in the chaotic main station hallway.  I’ve done it many times and not been bothered by attendants or conductors (unlike airplanes, which are usually swept and cleaned after every flight, the usual train is only serviced at the end of the day).

Obviously, you need to make sure the train doesn’t roll away taking you someplace you don’t want to go, but the chances of this happening are minimal as you’ll notice people start trickling in about ten minutes before departure.

Off-hours and hideaways in hotels.  After the maids have come through, and before the next round of guests check in, is an ideal time to get some peace in your hotel room, especially if it’s anything but tranquil in the evening and early morning. The ideal time window is usually between noon and three p.m.

If you’ve already checked out of a hotel, don’t feel bad about relaxing in the lobby a few hours after giving up your key.  It’s unlikely that any hotel employee will ask you to leave just because you’re done and paid for; after all, they want you to come back on your next trip, and write a nice online review about your stay.

Finally, a surprising number of hotels – particularly in Europe – have rooftop terraces.  These are often underutilized, because 1) guests aren’t aware of them, or 2) they simply forget to head up there.  The terrace can be a great escape when everyone else on your floor seems to be checking in, or coming in and out of their rooms, at the same time.  An added benefit is that you get to see the city from a bird’s-eye view, which can make it look less intimidating and give you a better perspective of where you are.

Airport quiet spots.  For some peace and space, many people know to head to the waiting area of a deserted gate.  Less commonly sought, but equally quiet places include interdenominational chapels (many international airports have one, and you don’t have to pray in order to use the room), and the lobbies of pre-check-in areas.  Most people automatically rush to the check-in counter and through security when they arrive at the airport, passing by many empty waiting areas adjacent to the airline ticket counters. 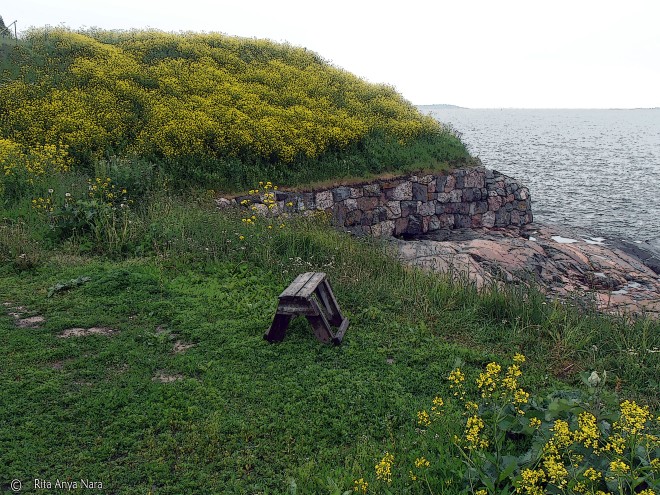 It’s not always realistic to find a place like this to unwind, but there are still plenty of places to relax out there — if you know where to look. (Pictured: Suomenlinna, Helsinki, Finland.)

Leave a Reply to The Anxious Traveler Cancel reply

© Rita Anya Nara, 2013-2014. Unauthorized use and/or duplication of this material, text, or images, without express and written permission from this blog’s author is strictly prohibited. Small excerpts and links may be used, provided that full and clear credit is given to Rita Anya Nara with appropriate and specific direction to the original content.
Loading Comments...
Comment
×